Sample Complaint Letter For Defamation Of Character – The article is full of inaccuracies and false allegations, and it has caused a great deal of emotional distress. With this help, you take down the article immediately and issue an apology to me for publishing it without properly verifying its accuracy.

look for our Printable Defamation Of Character Complaint Letter Example for your reference.

If you have been the victim of defamation of character, there are several benefits to pursuing legal action. First and foremost, a successful lawsuit can provide financial compensation for damages sustained. In some cases, such as with slander or libel, monetary recompense may be enough to repair the damage done to your reputation. Additionally, defamation of character lawsuits can provide victims with a sense of closure and vindication. Finally, a successful legal case may deter others from engaging in similar conduct in the future. 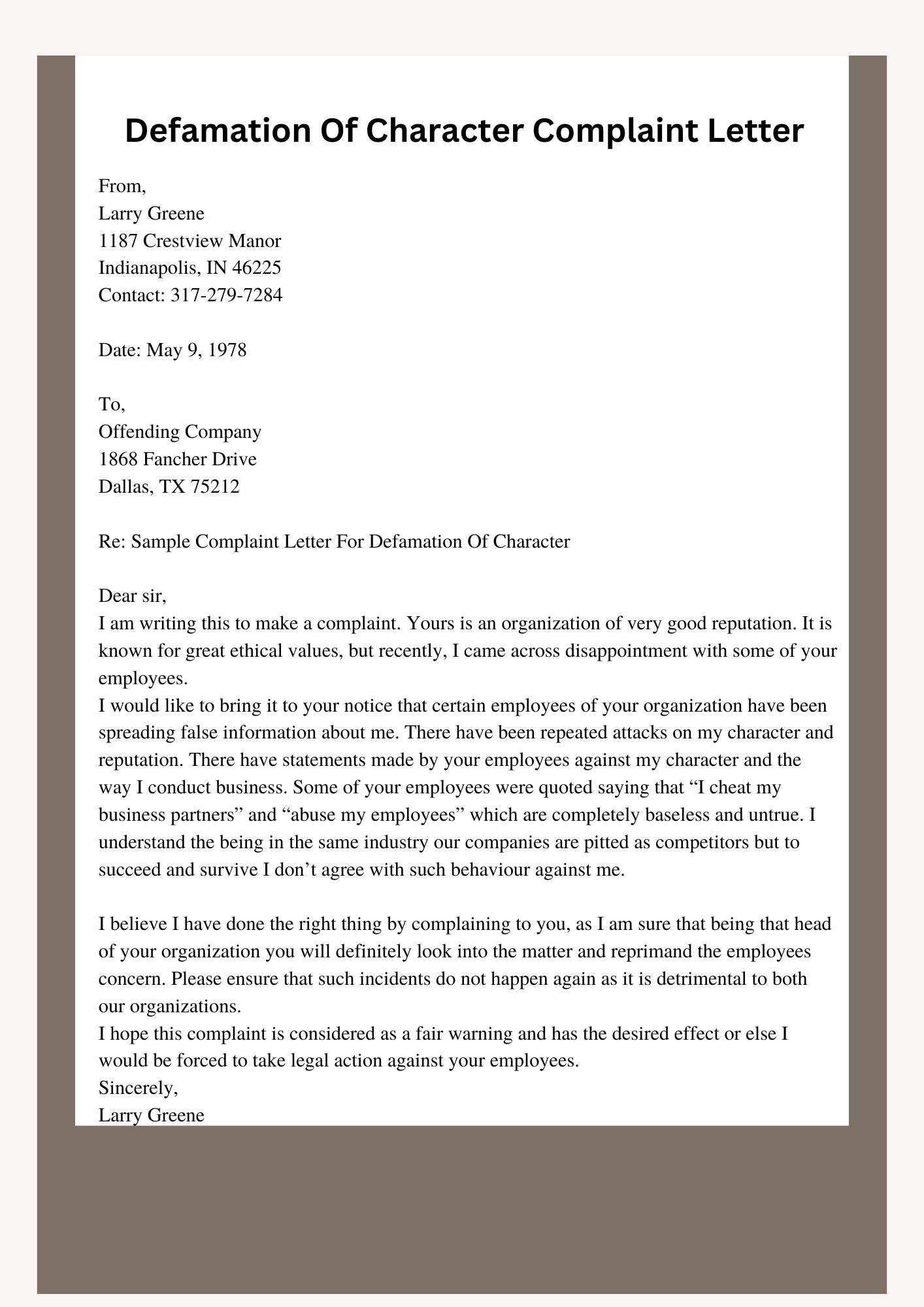 If you have been the victim of defamation of character, there are some things you can do to protect yourself. A complaint letter is one tool that you can use to make your case. This letter will explain what happened and why you believe that it was defamation of character. You should also keep copies of all relevant documents, including emails, letters, articles, and any other communications that could be used to support your case.

When someone feels that they have been wrongfully maligned by another person, they may file a complaint of defamation of character. This type of complaint is made against another individual, and typically refers to negative statements made about the complainant in public. Complaints of this nature can be difficult to prove but can result in significant financial damages if successful. Here are some tips for preparing a defamation of character complaint letter:

1. Begin by documenting your evidence. Keep track of who said what, when it was said, and where it appeared. This will help you build a strong case if necessary.

2. Make sure to state the specific defamatory statement(s) that you believe are false. Be specific, as courts are often stricter about libel than other forms of defamation.

3. Keep in mind that the statement must be false. If it is true, it is not defamatory. For example, if someone says you were late to work, but you were actually 30 minutes early, there is no defamation of character. 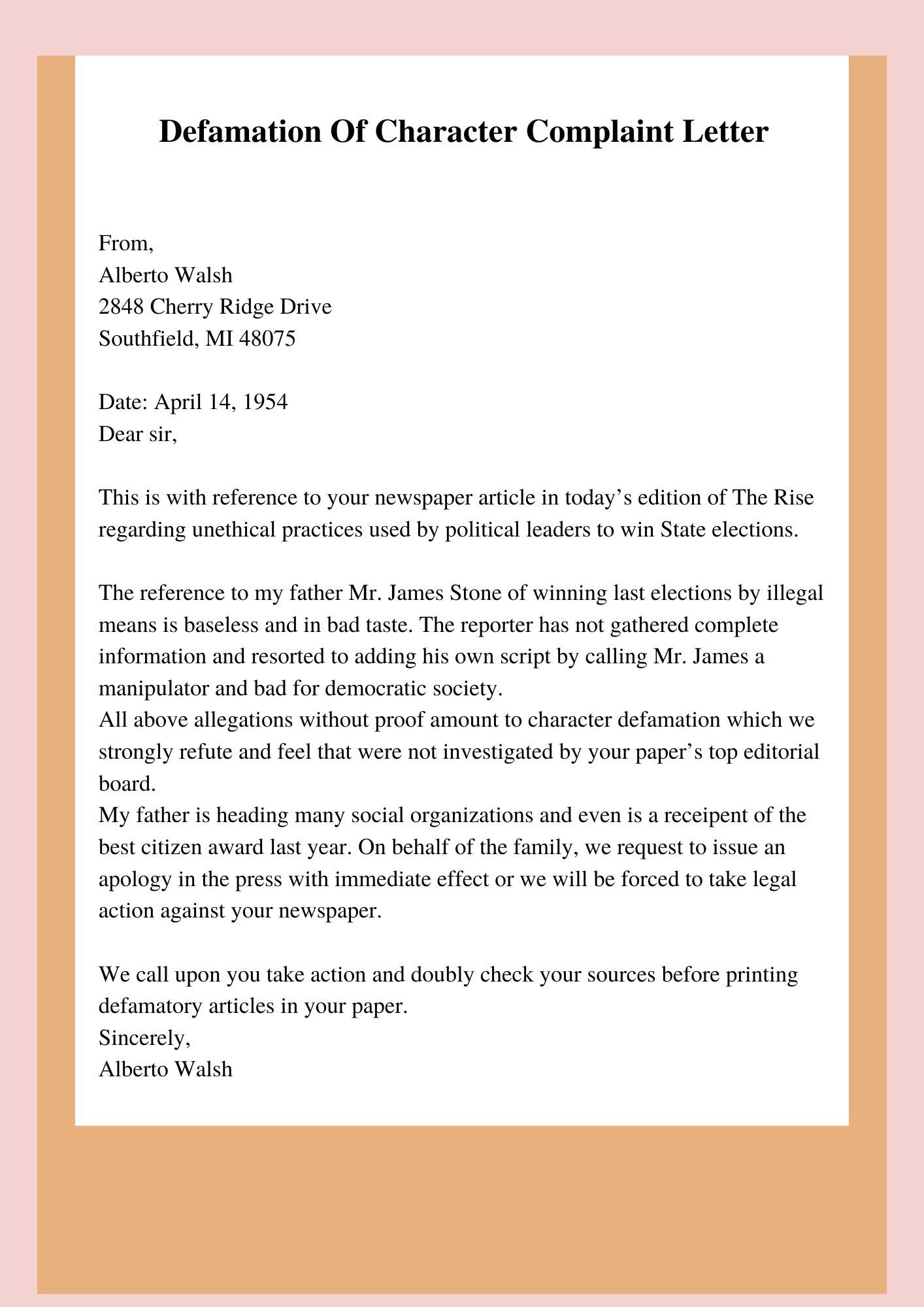 In today’s society, one must always be careful about what they say and how it may be interpreted. When someone is defamed by another person, it can be a very hurtful experience. Defamation of character can take many different forms, from spreading rumours to making false statements about someone. If you have been the victim of defamation, there is help available. Here is a sample complaint letter that you can use to file a claim with the appropriate authority.

The complaint Letter For Defamation Of Character Template PDF given here will be helpful in writing this letter. 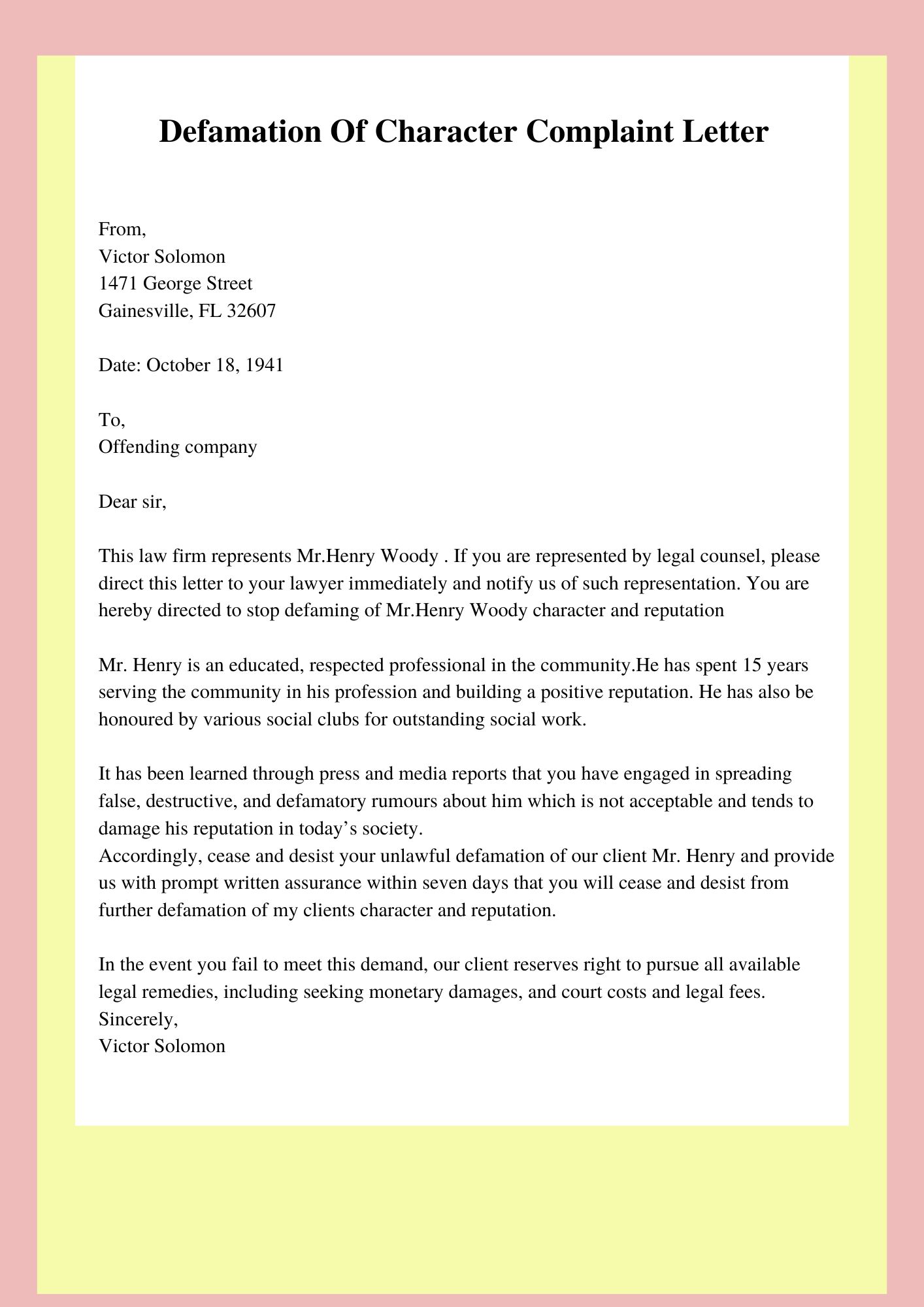 If you have been the victim of defamation of character, you may feel upset and frustrated. Defamation can take many different forms, from the spread of false rumours to damaging written statements. In order to protect your rights and pursue justice, it is important to have a solid understanding of defamation law. This overview will provide you with the basics necessary for writing a complaint letter.

First and foremost, you must understand that there is no single definition of defamation of character. Instead, this type of lawsuit is based on the particular facts of each case. However, there are some general characteristics that all defamatory statements must meet in order to be considered illegal. These include making an untrue statement about someone that could damage their reputation in the eyes of others, intending to harm the person’s reputation, and publishing or circulating the statement without first obtaining their consent.